The Garden in the city is an idealized landscape, a human construct of a fictional nature in an urban context. It allegorically describes our relationship with nature and the level of our intervention in the natural world, which is expressed in the way architectural space of a building, ensemble of buildings or a city transitions into the garden space. A Garden is an important element of the civic realm and needs to be connected with and serve as a connector of urban events in the city.

Recently there has been a competition project chosen in this area for the building of the New National Library of the Czech Republic. The particular site chosen and the building proposed are not, in my opinion, appropriate for the level of civic importance of such building.

The ambition of this project is to develop a counter proposal not just for the building of the National Library but  for developing an urban master-plan of the area, and finding a proper civic site that will meaningfully connect the library with the Old Town and the rest of the city. The proposal is that part of this area will be built up, creating a new neighborhood structure of mainly mixed-use private buildings and public buildings such as the library, theater and university buildings. A sequence of public gardens connects the major civic buildings with the Old Town to the South, the Prague Castle complex to the West and the rest of the neighborhoods to the east.

I have defined the garden in the city as an allegorical story that describes man’s relationship to nature, and also as an important urban element of the civic realm that needs to be connected with and serve as a connector of urban events in the city.

The garden sequence that is the conceptual idea of this proposal describes a journey of mankind towards civilization (towards building cities). The library is a focal point of this sequence – a symbol of searching, learning, acquiring knowledge and passing it on.

The story starts by leaving the Old Town of Prague and being drawn toward the building on top of the hill on the other side of the river. One crosses the river Vltava and through a gate that marks the allegorical end of the city and beginning of nature one enters the first garden of the sequence: The Wilderness Garden. This is an illusion of an untamed nature as it existed before human intervention that is when people were still hunters and collectors. A minimum of human intervention occurs here, as if this garden has happened accidentally. Architectural space does not transition into the garden space; instead, the wilderness has its own structure. The library cannot be seen from this garden.

Passing through the garden and up the hill onto the next vertical level of the garden sequence one enters the Orchard Garden. This garden is an allegory of tamed nature. In the same way as the fox in the Little Prince story wanted to be tamed by him, to become friends with him, humans tame nature and live in symbiosis with it; they learn how to use natural resources and cultivate wild nature for their advantage. Humans are inevitably dependent upon nature and therefore must remain “friends” with it. This garden is characterized by the sense of land cultivation, topography adaptation, wild trees are cut down and vegetation mainly used for food production is planted: orchards of fruit trees, vineyards, herbs gardens, berry gardens, meadows and lawns (representing pastures). Human impose a certain degree of structure to the cultivated nature just enough to organize it so that it is easier to be managed.

From the Orchard garden one can enter to the library, the transitional piece of the sequence, the edge between the natural world and the man-made world. In the library humans acquire knowledge and the ability to reason. Thus, they enter the Garden of the City. This garden is an allegory of the man-made world, it represents man building his own nature to live in – the city.  Man invents a sense of order that he than uses to organize the world. The building of the library sets up an order that organizes the garden as well as the rest of the new city. The architectural space of the buildings and the urban space of the city transitions into the garden space: or does the garden space transition into the Architectural space? The relationship is reciprocal. Nature is controlled; plants are manicured in order to achieve spatial effects of streets, squares and courtyards. The library carries a very strong urban axis from the Old Town Square through the building to the Garden of the City. The garden sets up a cross axis that on one side (west) connects the new garden with the existing Royal Gardens of the Prague Castle and on the other side (east) the axis is terminated by the new theater. The theater ends the Garden of the City and starts the real city made up of real buildings, blocks, streets and piazzas.

Because the library is the transitional element between the two worlds it faces both The Garden of the City and The Orchard Garden, it acts as a palazzo when facing the “city” and on the other side acting as a villa when facing the “garden”.  One is able to enter the library from both sides. Both directions are reconciled in the central interior public space of the library.

The story of the three gardens and library can be told the other way around. Civilized Man, the product of the Garden of the City will always have desires to reconnect to nature. The journey of man coming through the library back into the natural world experienced by civilization and knowledge will provide for different kind of experience. As he leaves the library and enters The Orchard Garden he does not see the Old City in front of him yet, he can enjoy the garden and the goods of nature. The Garden provides relaxation and opportunities for intellectual reflection. Unlike the other way around, where the library is the focal point that appears at certain points and that one is driven to, in this direction one does not have a focal point that attracts interest.  As one gets closer to the first part of the Orchard Garden, to the edge of the hill, the Old Town and also the rest of the garden sequence are revealed. At this point one can make a choice between returning back to the city he or she knows, or taking an adventure through the wilderness, into the city of the past and enter the old Jesuit library- Klementinum near the Old Town Square. Here the circle of the story can be enclosed and one can start the journey again.

Garden once again gives us the sense of nature in the city, at the same time continues the spatial characteristics of architecture and connects major urban events formally as well as with a narrative that runs through the city as a string and tights all the different pieces together. 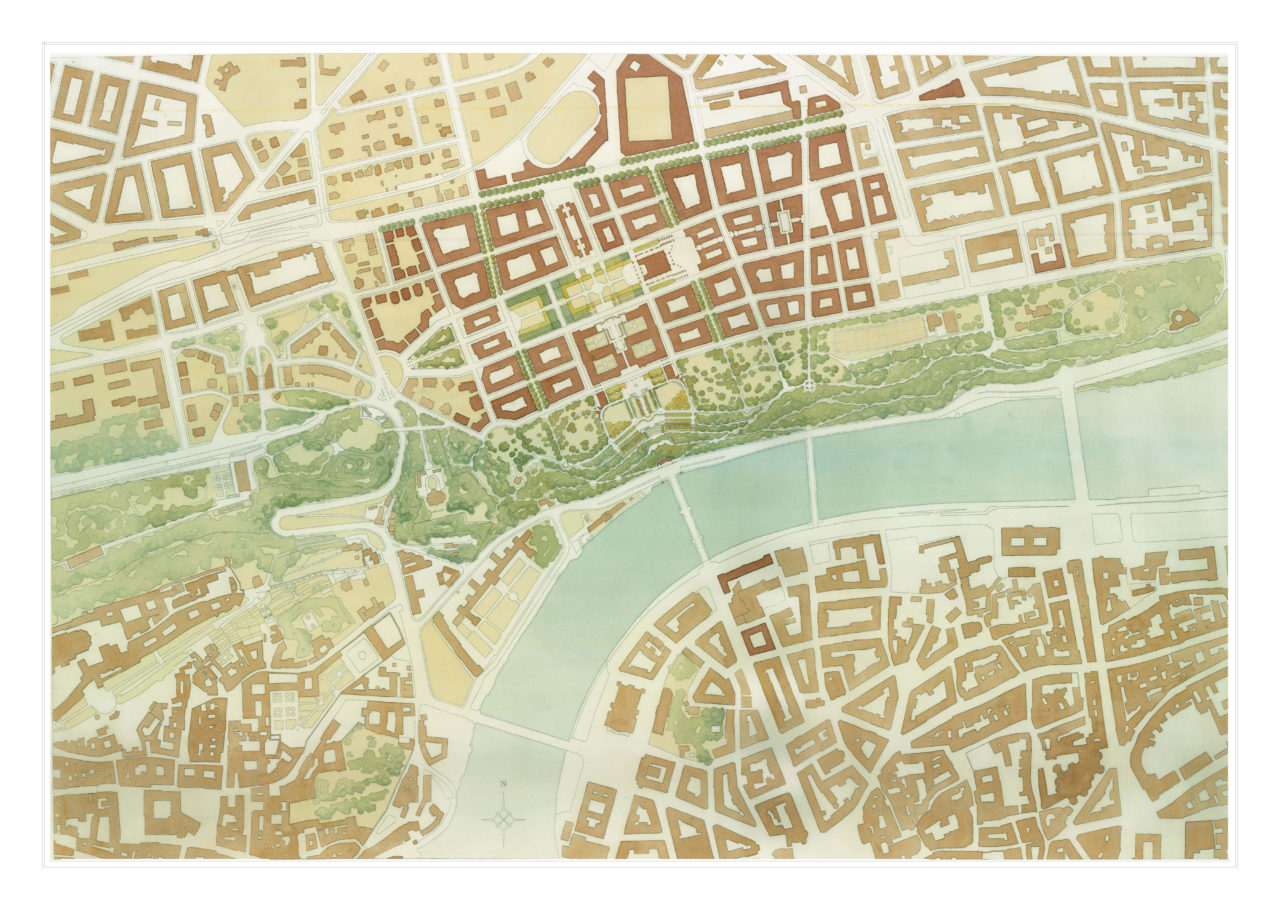 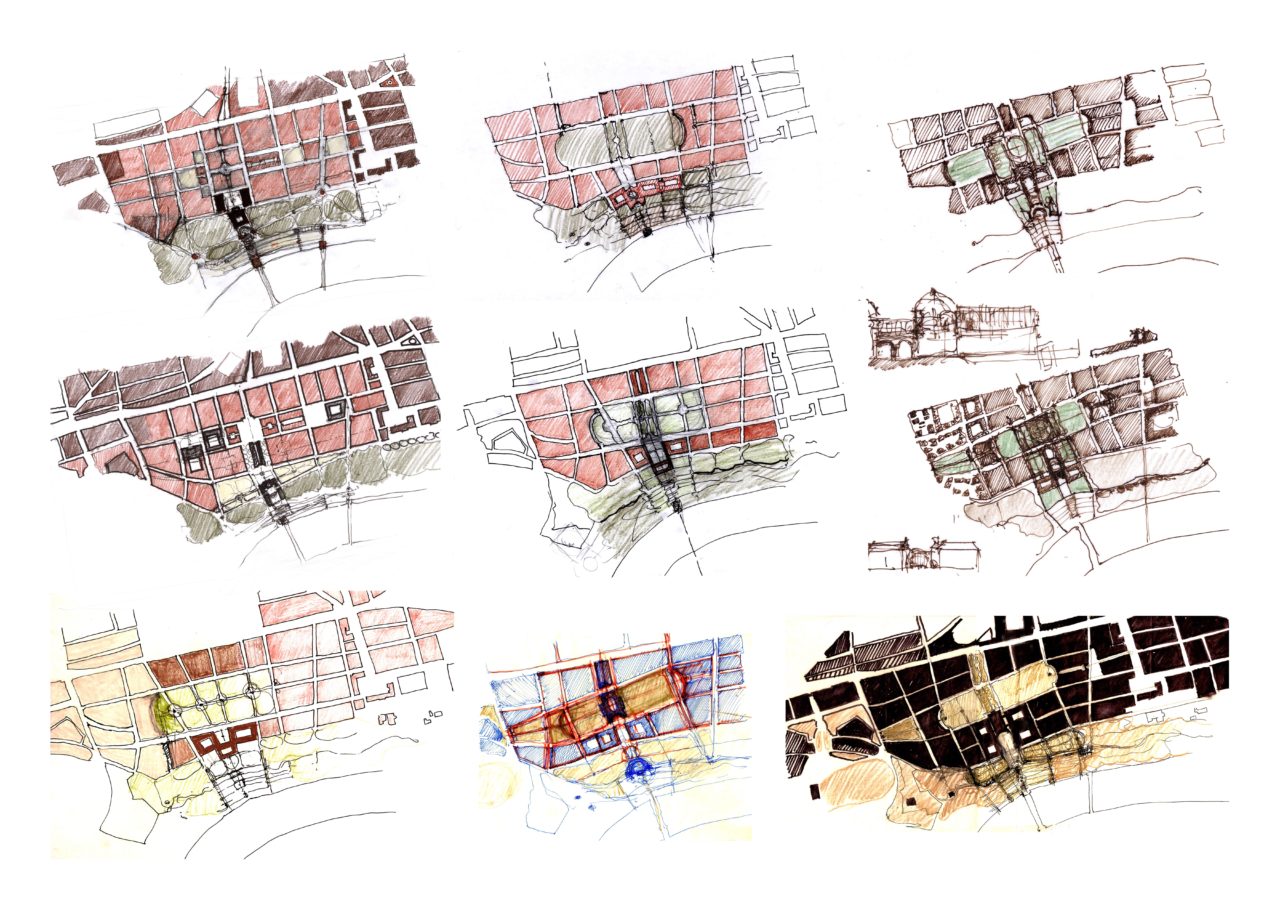 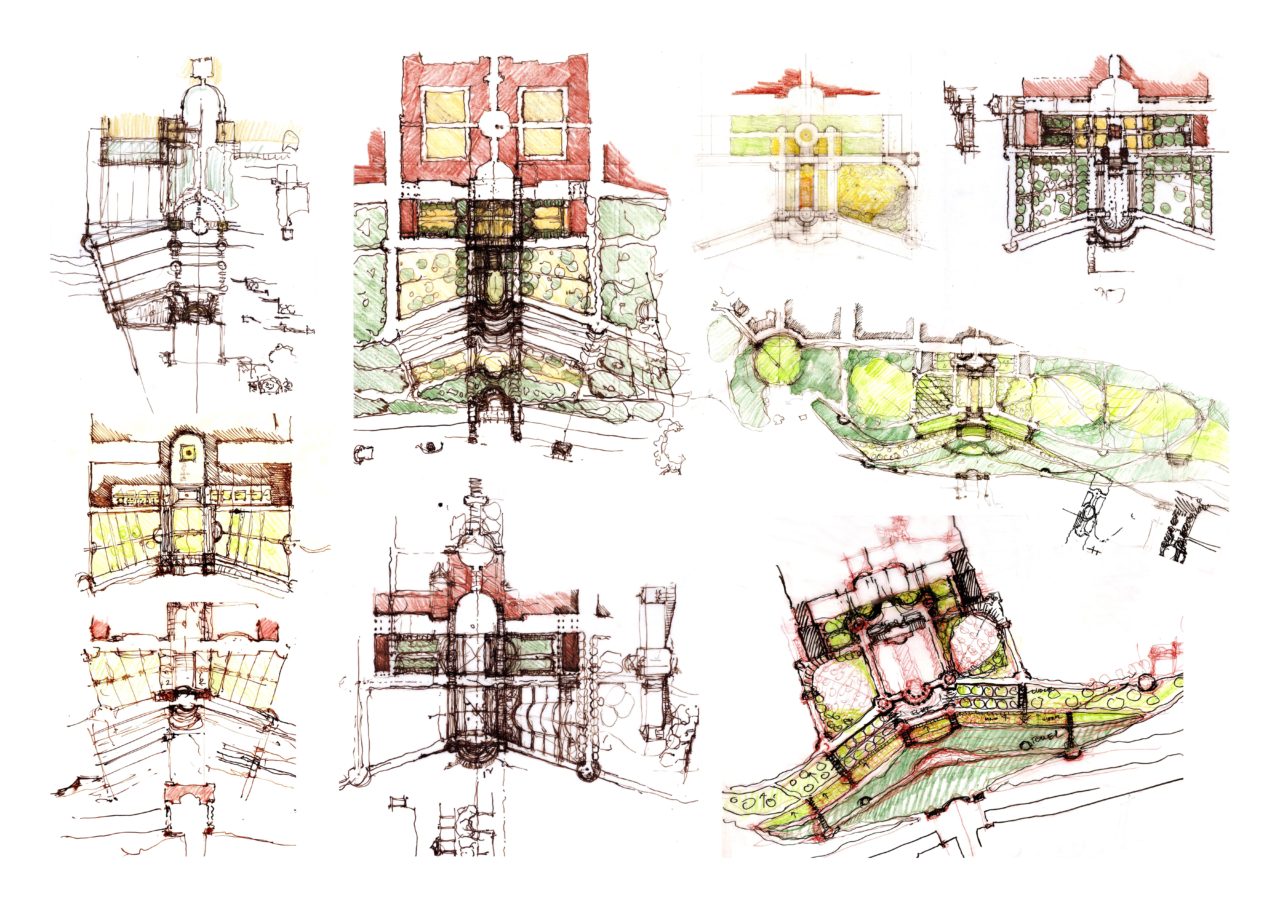 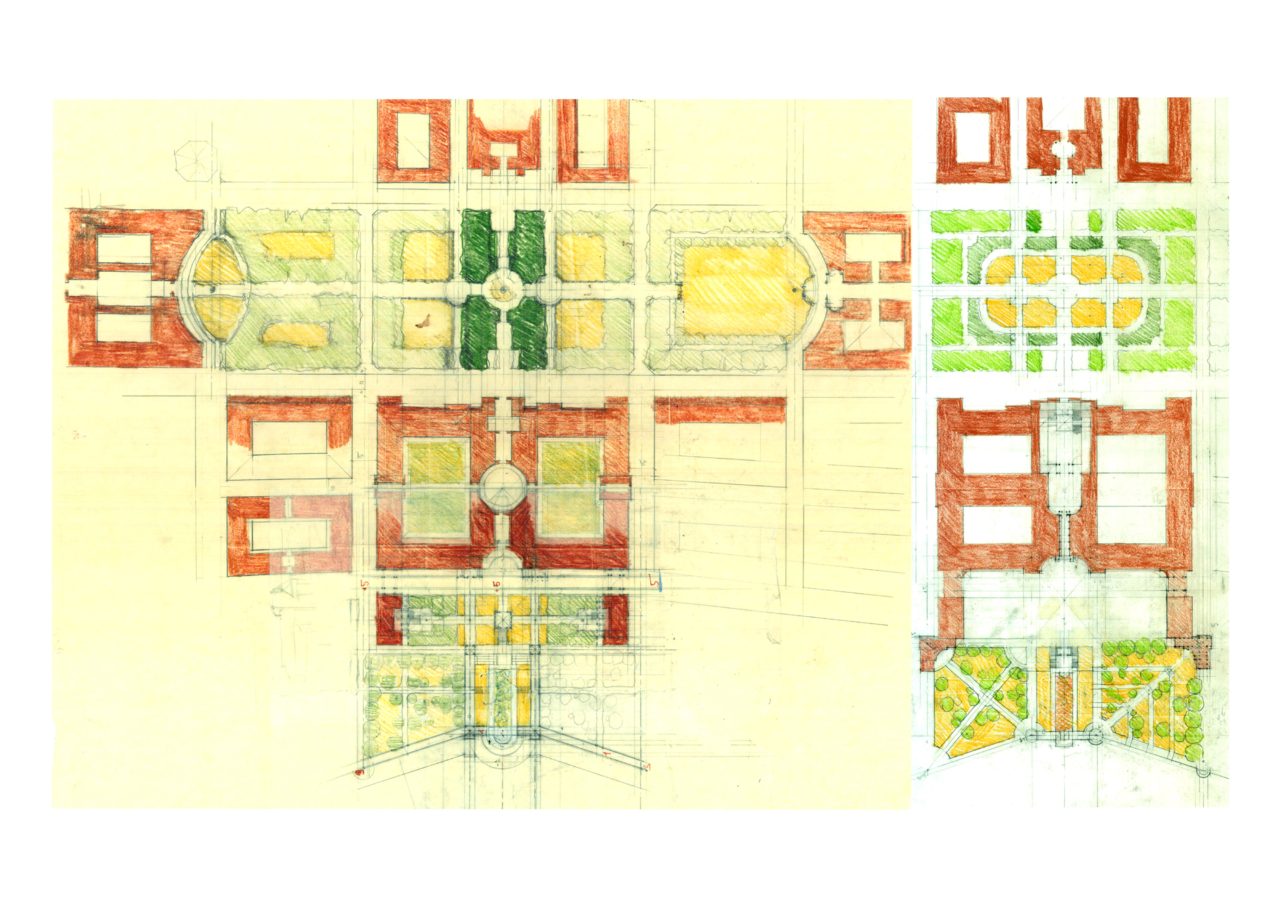 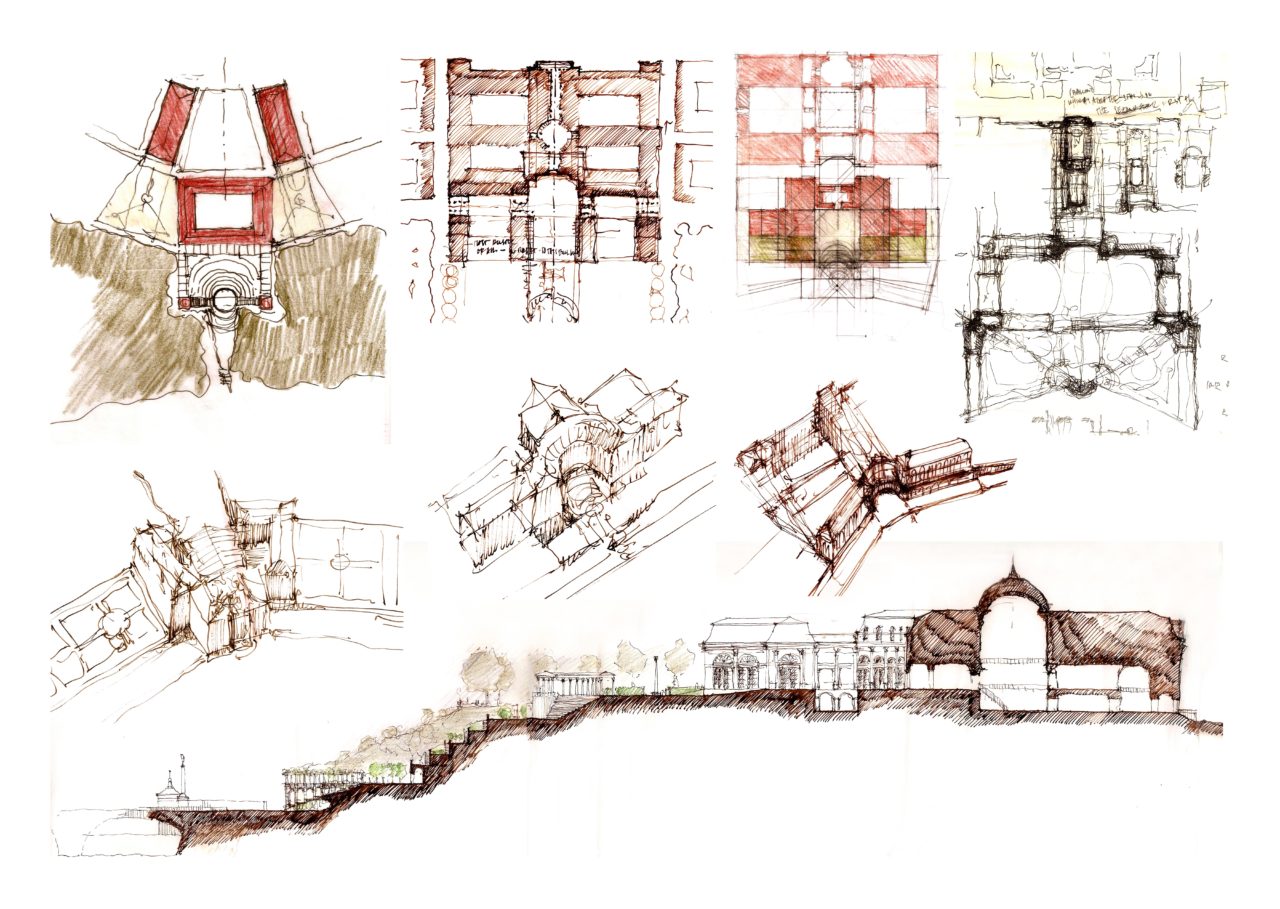 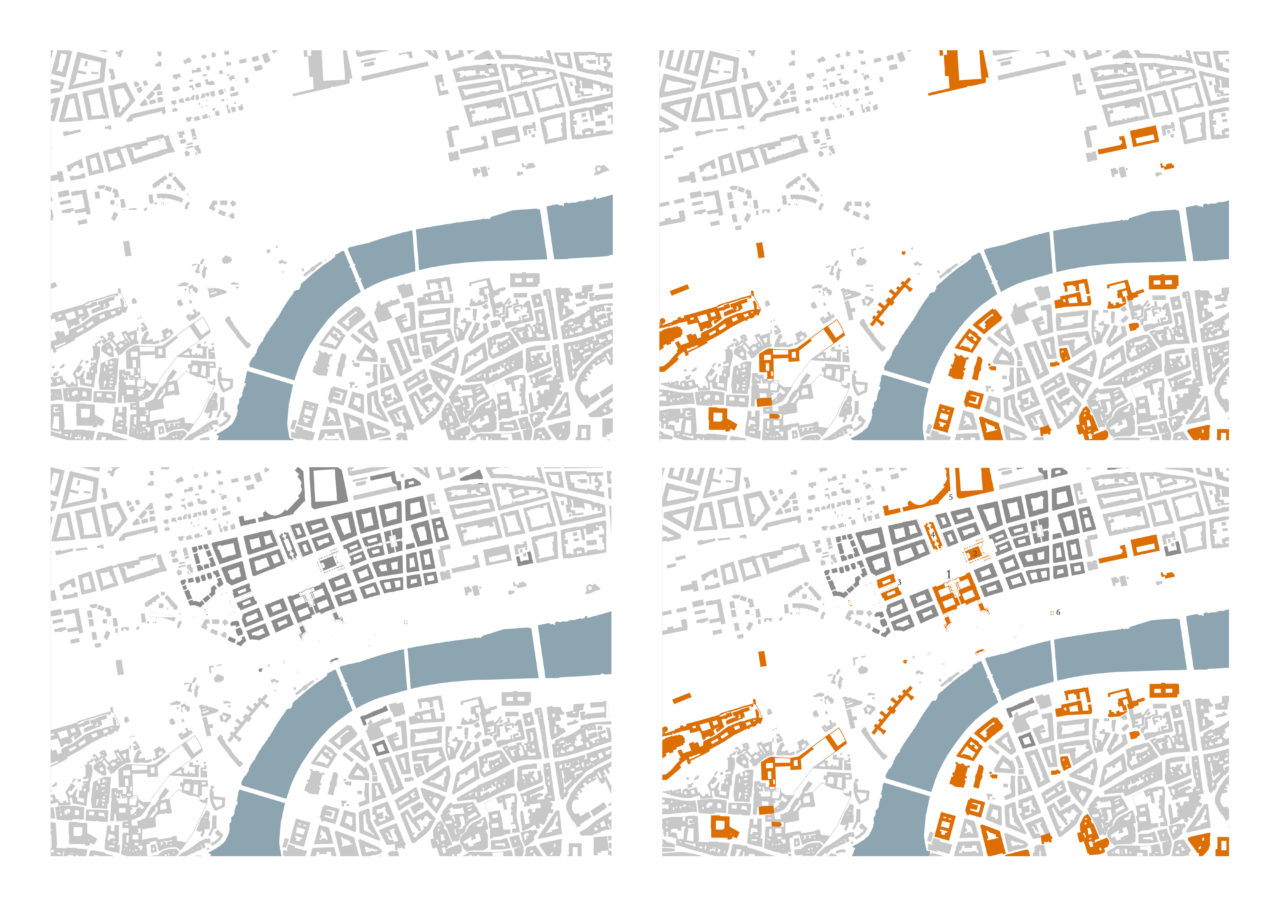